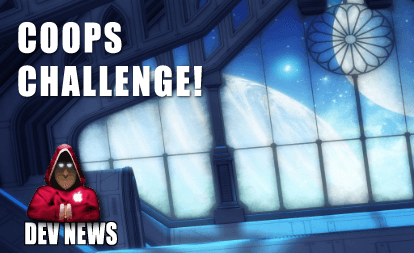 I have this morning at 11:00 AM activated the Eighth Coops Challenge. This means that activities in game are now being tracked (by player and profession) and if included count towards the Goals set in the Coops Challenge.

You can access the Challenge Status Screen in game via the CE Guides Tab and then click on the ‘Coops Challenge’ link.

For those new to Challenges, you will find that there are a lot of activities now being tracked with varying goals to meet to breach each goal and move on to the next. These include all the primary professions and even include a Hand in of A.I Data Research – Sections that are being recovered and awarded to you for simply playing. These SHOULD be handed in at any of the Coops Challenge Exchange Offices that have been opened during the Challenge. Each one is valued at 10 Festive Points to be awarded when they are handed in at one of the aforementioned Offices.

Global Fuel Ticket & Goodie Bag
As each goal is breached a counter goes up by 1 increasing a final hand out of a global Fuel Ticket for the entire Server on the day after the competition closes. It also increases the ‘Coops Goodie Bag’. The goodie bag will be posted and added to once the first goal has been reached.

There are also Three MECH stages this time around and that means you will need to be placing Mechs into the mech zones to knock out as many ‘Pirate’ Mechs as you can this time around!

To take part and for your kills to Count you need to have a PL at the beginning of your mechs name. IE ‘PLonker mech’ or ‘PL Killer Mech’

There will also be special PRIZE MECHS added but I will post on this separately in the competition thread so keep your eyes peeled!

Three New Sections
I have added THREE new sections to this Challenge. The first was an obvious choice and that’s RAID resources Salvaged. That means that’s those killing the raids help count towards the RAID death kill score whilst those clearing up to allow more to spawn ALSO count to a new RAID Salvage section.

The other two are Both Planet and Derelict Exploration. This refers to straightforward walking around exploring and not the sub-skills/hobbies that we all do whilst doing these activities. But if you explore a Derelict or planet you are now also increasing these goals activities.

Personal Rewards
I will also be looking through the player’s logs and accumulated data AFTER the competition closes and awarding some special prizes to those who for THEIR LEVEL did really well. That means there is as much incentive for level 10 players as level 200 players to take part!

A list of Coops Challenge hand in points can be found in the Official Forums https://www.facebook.com/coreexiles/posts/10155697742838673

GAME ON and Good Luck Captains!